Showing posts from September, 2018
Show all

Internet of Things, Importance of Backups, and more

Someone screwed up! Man has it been a great week to watch the internet meltdown! We have politicians being accused of sexual misconduct, thermostats malfunctioning, domains for some of the biggest companies being taken offline by tiny little companies nobody has heard of and more! First We Feast As many of my close friends will tell you, I am obsessed with spicy foods and am a pepper snob of sorts... Or, at least that's the nice way of putting it. Other people might describe me as something other than simple a snob, but I digress! Well, I also enjoy watching First We Feast  on YouTube! There's something so satisfying about watching famous people suffer while eating spicy wings that just does it for me! [embed]https://www.youtube.com/watch?v=sGCKnuKH5dQ[/embed] Well, today during the testimony from Dr. Ford's testimony, Host Sean Evans tweeted that people should "...stop whatever the hell ur doing" to watch the Season 7 preview on Twitter. As most of us even in sma
Post a Comment
Read more

September 25, 2018
Well folks, we're working on getting back into the swing of things around here, however, on a positive note Google has partnered with uBreakiFix to help those in Hurricane Florence affected areas receive free phone repairs! To receive a repair for your Google Pixel, Google Pixel XL, Google Pixel 2 or Google Pixel 2 XL simply visit a uBreakiFix location in your area . This applies only to residents and locations in North Carolina, South Carolina and Virginia. The offer ends Friday, October 19th 2018. Check out uBreakiFix for full details ! Visit Lemacks Media https://lemacksmedia.com/news/09/25/free-pixel-and-pixel-2-repairs-for-hurricane-florence/ for updates and more content.
Post a Comment
Read more

September 12, 2018
Due to the direct and imminent impact to the Carolina's we have migrated all Google Cloud South Carolina Data Center data to Iowa. We have also proactively increased all websites/servers from daily/weekly backups (depending on your plan) to every 6 hours. All backups are being exported to 3 external locations. Lemacks Media will be closed starting at 5pm EST Wednesday, September 12th, 2018 until it is safe potentially early next week. We will keep our social media as up-to-date as possible (primarily Facebook , Instagram and Twitter ). We hope that everyone is safe and has made all of their disaster or evacuation preparations. -Andrew Lemacks CEO & Founder of Lemacks Media Visit Lemacks Media https://lemacks.app/n9ykj for updates and more content.
Post a Comment
Read more 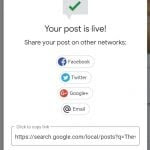 Sliding under the radar with new features A seemingly unannounced new feature has hit Google's Business tool for businesses leverage Google Maps and Google Search . While creating a post on behalf of newly launched website for The Red Eye Bakery this morning I was prompted with this dialogue for the first time. [caption id="attachment_587" align="alignnone" width="150"] Google Search Post[/caption]   This is a pretty awesome new feature for business owners who want to drive more traffic to search and maps on their behalf, as well as enabling the ability to really create useful/meaningful posts without having to recreate or copy and paste them multiple times! Have you gotten the new prompt yet? Let us know what you think of the new feature and how you plan on using it for your business! Visit https://lemacksmedia.com/news/09/07/google-sneakily-released-this-new-feature/ for updates and more content.
Post a Comment
Read more

September 06, 2018
Red Eye Bakery website is launching After a long awaited time, we are soft launching The Red Eye Bakery 's website today! We're still working on sorting products and variations, so at this time you will not be able to pre-order products for pickup. We'll keep you updated as we finish the rollout over the next couple days! Visit https://lemacksmedia.com/news/09/06/red-eye-bakery-site-launch/ for updates and more content.
Post a Comment
Read more

September 05, 2018
Google isn't calling you I don't know how things like this still make the rounds in the world. People still share fake articles and posts on social media just as often as the last generation shared chain emails. People still fall for African Prince email scams, and they still panic when the "IRS" calls them with an "urgent message". So why, in 2018, small business owners still believe Google is calling them to verify their already verified Google Business listing blows my mind. Let me be blunt with you, taken verbatim from Google's own Safety Center  "Google does not make unsolicited sales calls from an automated system . However, we may place automated phone calls to your business, as a service to Google users, for non-sales tasks like making reservations or confirming your business hours . These calls are only enabled for businesses that offer public phone numbers for the purpose of receiving calls from the general public, and use the automated vo
Post a Comment
Read more
More posts