Showing posts from December, 2018
Show all

December 13, 2018
Google's reCAPTCHA v3 is amazing Gone are the days of reCAPTCHA math problems, and picking images, and checkboxes, etc! Since Google acquired reCAPTCHA they have been using it both to prevent bots and spammers from taking over the internet and to train machine learning models, now end users won't ever see it! That's right! Google has been using you, a human, to train machine learning models to identify things within images. You know, "Choose all images containing streets signs", etc. You thought that was to prove you were human? Only partly, it was also Google leveraging billions of humans interactions into training it's machines. Ironic, right? Well, now reCAPTCHA v3 is here, which removes any friction or difficulty actual humans might have had by eliminating direct interaction/prompts. Instead it now leverages information like known spammer accounts, IP addresses and regions to identify the probability that the user is a human. Once verified, reCAPTCHA v3 a
Post a Comment
Read more 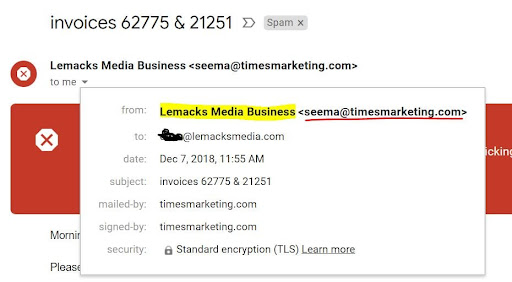 Periodically I check my spam folder to see if something might have accidentally been caught by Google's spam filters for G Suite. Today I stumbled upon this great example of why DNS records are important, and why setting them up correctly should be a priority for every business! Highlighted in the from field is "Lemacks Media Business", however the sending email address is "seema@timesmarketing.com", and they sent it to me directly. Typically we use business@lemacksmedia.com for general business inquiries, so seeing that in the from field was an immediate red flag to me. I wouldn't email myself from a group, and the sender can't spoof that group because they aren't an authorized sender.  Google recognized that it's an outside source attempting to bill me, from me, not from the Email DNS Records, but due to it being caught/marked as spam by others. However, it reminded me why this is serious, especially if this were to slip past a spam filter and
Post a Comment
Read more
More posts